Across UK Higher Education, the month of November was ‘WriteFest’, a month for writing.

As part of our WriteFest provision, we ran four writing retreats, one a week. They’re structured days, set up specifically to allow academics to write, without the distractions of their daily work.

The retreat structure has always encouraged productive writing. But – with a whole month to play with – I was keen to examine the retreats themselves, and to identify and adapt anything that would make them even ‘better’ – to make the environment as conducive as possible to writing.

Now, at the end of the month, here are some things that we’ve learned, and changed.

Introduce – but not too much

The first retreat I ran, I was really keen to make it as much about just writing as possible. I gave almost no formal background on why we run retreats the way we do. Nor did I really introduce myself… I tried to be largely invisible, hoping those who were there would simply get on and write.

They wrote… but it wasn’t until one of the attendees told me at lunchtime that if I’d introduced myself and why we do what we do, then people would be able to trust me, and the process more, and relax into writing.

It’s true – we academics do like to know ‘why’!

And so, over the next few retreats, I developed and tested an introduction.

The first version of it was way too long, which resulted in me turning it into an article which I posted on this blog.

The second version was better, but still a bit too long.

The third version was about spot on.

At ten minutes, it’s still a bit of a chore for those who attend regularly (although some have said that listening to it is instrumental in getting them into their writing ‘zone’!) but it’s about the right length for those who attend for the first time. It’s also short enough that it allows us to run a warm-up exercise and some goal setting to be taken at a relaxed pace, before we actually start writing in earnest.

Given the science about how long we can focus for on knowledge-type activities, it shouldn’t come as a surprise to find that the length of the writing sessions themselves was a contentious topic.

Initially, we were informed by a variety of plans (available online – see Keele’s, Edinburgh’s, one from a national HERG sponsored event, and Murray and Newton’s original paper), and adopted pre-lunch sessions of 90 mins and then 60 mins, and after-lunch sessions of 75 mins and then a final hour. That approach seemed to make sense too… do slightly more in the morning, and in the earlier sessions, and slightly less in the afternoon and the later sessions, when you’re tired.

Except that, in practice, people didn’t like it. A number of writers said that they weren’t ready for such a long first session, and started drifting after an hour. Others found that they were tired out by lunchtime, and didn’t have much energy for the afternoon.

So, instead, we started both the morning and afternoon with an hour of writing, followed by 1 ¼ hours.

The change was enormous. Everyone could handle the first hour with energy to spare, so they then seemed to carry the momentum into the rest of a morning, which then seems to fly by. The first session of the afternoon is often the hardest, but people are ready for that, and know that it’s only an hour, before energy picks up in mid-afternoon with the end in sight.

I also found that flagging the regular additional 15 mins on the end of each half day gave people the chance to shift their awareness to themselves, and make notes about their writing practice: which session they had preferred, how tired they were, what else they might need to do to prepare for a retreat, and so on.

The general feeling is that this change improved people’s awareness of their writing practice, and – potentially – of their thinking ‘selves’, in a way that wasn’t so readily available with the original format.

The addition of music

It now seems inconceivable to think that we ever ran retreats without music. But we did, until someone pointed out that announcing “you have two minutes left” into concentrated silence triggers such a Pavlovian panic response in academics who have spent more time than is healthy cooped up behind exam desks, that it was making people anxious!

Now, we have music on in the background as people arrive, and music on in the breaks and at lunch. We also use it to stop periods of writing… gently turning it up to signal the move to a break. I’ve used song choices to bring humour into the day (Working 9 to 5, Please release me, let me go?), and to compensate for the weather (Here comes the sun?).

Of course, what you turn up can also be turned down… bringing a sense of stillness and anticipatory listening that allows the person leading the retreat to speak into the quiet without needing to try and get people’s attention.

I’m even getting suggestions for playlists!

Many retreats encourage the very central ‘community of practice’ aspect of a writing retreat by using a relatively strict seating arrangement. Some adopt exam rows. Many go for a committee doughnut, like this: 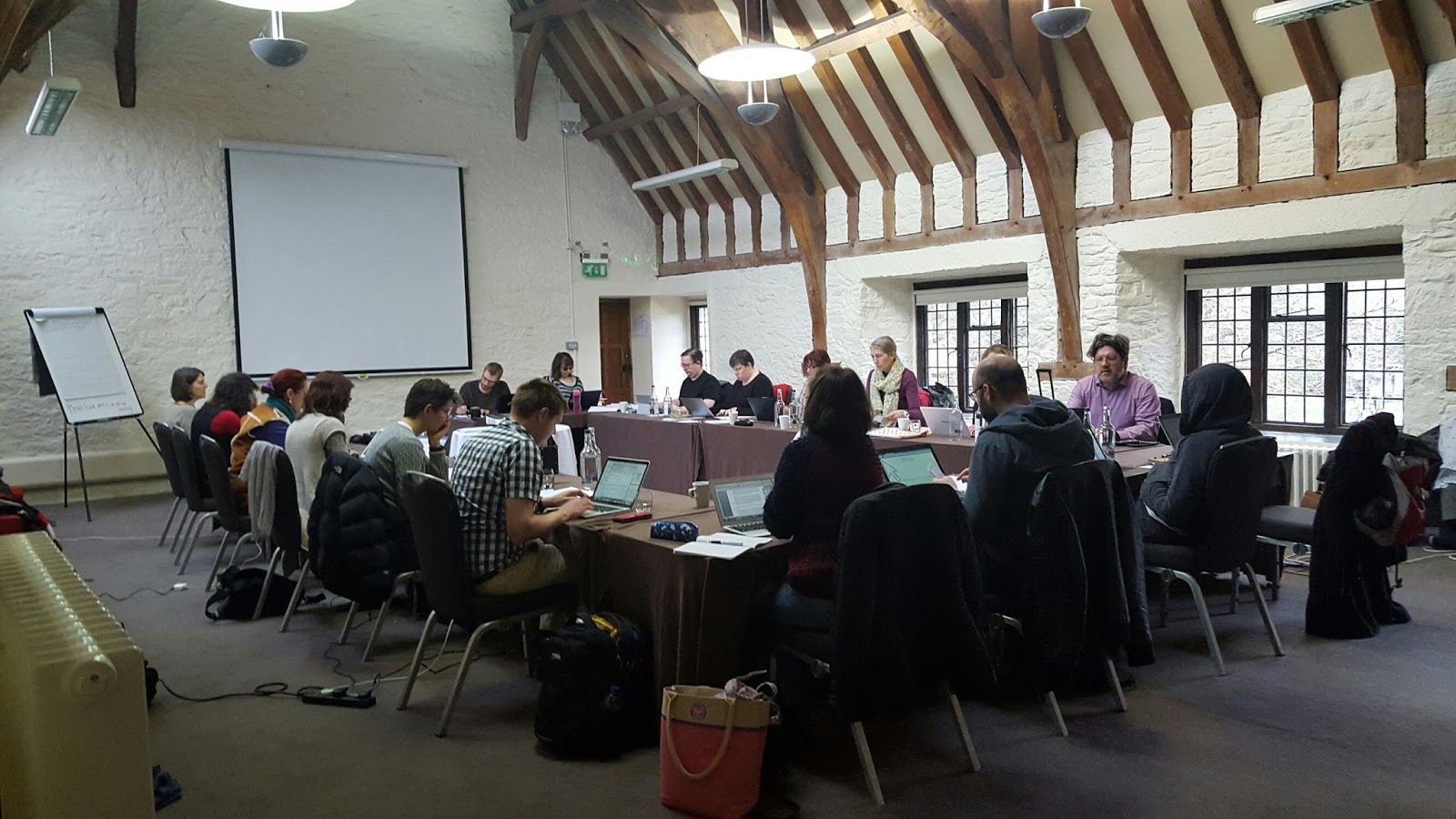 As someone with a keen academic interest in interactive spaces, how they are shaped, and how they impact those in them, I wanted to allow people to find a working space that made them physically and cognitively comfortable. I experimented with different numbers of people, around different sized tables. Communal tables. Individual tables. Tables in blocks, and rings. Fixed tables. Movable tables. Tables in the middle of a room, tables at the edge. Tables looking out the window. Tables looking at a wall.

I discovered that most people were most comfortable with islands of tables with space around them for four people, but with only three people working on them – with space to set out laptop, papers, coffee, snacks, and books… with a few additional movable or break-out tables also available for free use.

So that’s what I tend to provide now – with an encouragement that there’s no judgement if they want to move things around, or sit out on their own.

After all, a day is a long time to work if you’re not happy with where you’re sitting.

During WriteFest, we ran four retreats, each with about 15 people attending. That’s 60 full days of writing in which (amongst many other things) we’ve finalised and submitted at least two full articles to journals, and successfully secured an academic book contract.

We’ve also – I think – settled on a format for the retreat which works for the majority of staff at the UoB and that we can keep through to the end of the academic year.

Writers’ retreats will continue on the first Thursday of the month, each month, through to July.

Do sign up if you want to join us.